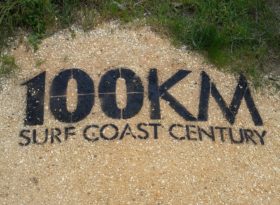 Despite a less than ideal lead in to SCC, I was very happy to finish this event and call it a success.

In my eyes, success is giving it everything you have, knowing you have performed well, under whatever circumstances and feeling content when you cross the finish line.

Two weeks prior to SCC, I managed to put myself in the way of my 60kg sheep, Polly, who darted away from my dog and completely took me out. This resulted in many last minute physio visits to release muscle spasms from the impact. Dry needling hurts!! I was going to be on the start line regardless but whether I was going to cross the finish line was an unknown.

I travelled to Surf Coast with my daughter Katelyn who was entered into the Trail Series on Sunday. Katelyn loves to join me at my running events and run herself whenever possible and it’s lovely that we get to share these experiences together. Precious memories.

We arrived at the expo mid afternoon and chatted with other runners at the La Sportiva & Bogong Equipment Expo shop. It was great to soak up the electric atmosphere as runners gathered, collected their rego packs, shopped and shared their excitement for the following day.

I was also honoured to join Lucy Bartholomew and Ash Watson for the Elite Q & A session that evening before the race briefing took place and then it was pizza, pasta and early to bed to try and get some rest.

It was a fairly chilled morning as the race didn’t start until 7.30am, so plenty of time for coffee, weetbix, crumpets and jam – great carbs to make sure I didn’t get hungry during the race.

Starting on the beach is fun but it was quite chilly with a strong breeze, so I arrived only 5 minutes before we were running to prevent a chill setting in. No need to warm up for 100km!

Leg 1 – the beach. I don’t particularly like running on the sand, the monotony and camber are challenging and so I had to work hard mentally here. Thankfully I had fresh legs and I was relieved that the camber and soft sand in stages were not causing me any grief with my right glute which had taken most of the impact in my recent ‘sheep incident’.

The slippery rocks, the rock pools and wading through the ocean brought a welcome distraction to the long 21km beach section. In fact, despite the initial chill, the ocean felt amazing! This section passed by much faster than I expected.

Leg 2 – I met Katelyn and team mate Alice McNamara at Check Point no.2 and after a quick change of footwear from the La Sportiva Kaptivas which performed amazing over the sharp and slippery rocks, into my long run favourites, La Sportiva Akasha’s, I swiftly left the aid station to hit leg 2. This leg is mostly coastal path and single trail. It was good to get off the sand and start to flow on the trails. The kilometres just seemed to fly by in this section and before I knew it, I was back at the start area where Katelyn and the La Sportiva team were waiting with fresh supplies to send me on my way.

La Sportiva – Leg 3 ! – this is described as the hilly section so it’s more like normal La Sportiva terrain . Mostly fire trail and single track and very pretty. A couple of steep hills allowed for a quick power hike and it felt good to use different muscles for a short time as SCC is mostly runnable, so not many excuses to walk!

Leg 4 – not long after leaving the final major checkpoint, you start to make your way back to the coast and then you’re on the home stretch to Anglesea.

With 77km in the legs when starting this section, it can feel quite taxing. There is the bridge to contend with that you have to get under with no path and so you have to climb across a rock wall whilst ducking under the bridge, interesting… then there is the beach section at about 95km… soft sand… argh!! Not my favourite part but I had could see the left turn to the finish. Head down, one foot in front of the other, keep moving.

My aim was to finish before dark… mission accomplished. I finished in 10 hours 41 minutes. Very happy with that time and pace. This resulted in 3rd female which was an added bonus.

This event is well organised with a great atmosphere and caters for all levels of runners wishing to take on a 50km or 100km trail race solo or in a relay team.

Anglesea is a beautiful place to visit and I would highly recommend this event, especially if you like the beach!