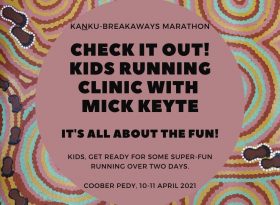 A few months ago I was approached by the race director of the Kanku-Breakaways Marathon, to host a “Kids Running Clinic” at Coober Pedy, an outback Opal mining town in South Australia.

The Kanku-Breakaways Conservation Park forms part of the traditional country of the Antakirinja Matuntjara Yankunytjatjara people. It is owned by Antakirinja Matu-Yankunytjatjara Aboriginal Corporation (AMYAC). The park is under a unique co-management agreement between the AMYAC, District Council of Coober Pedy and South Australian Environment Department.

The aim of the running clinic was to get the local children outside, to have fun exercising and encourage them to participate in the 2k, 5k or 10 km event at the Kanku Breakaways Marathon.

27 children registered for the Run Clinic, ranging in age from 4 to 15 who all just wanted to run and have fun ! We played a heap of different games that involved running and there were big smiles all round on both days. So much so that all involved are keen to do it again next year !

With the help of generous donations from friends, the local running community, La Sportiva and Trail Running South Australia we organised a goodie bag for each child. It was jammed packed with things to help keep them active, including sporting & learning equipment, healthy snacks and a voucher to use at their local sporting store.

The weekend was really rewarding for these Coober Pedy kids  as they do not have the same opportunities we have in bigger towns and cities. A lot of the local sporting clubs or facilities have closed so the local community appreciated the generous contributions that made the running clinic possible.

My next goal is to start up a parkrun (Free 5km run every Saturday) in Coober Pedy. I’ve also started a conversation with the local business and the community to see what else we can get up and running ! #watchthisspace

Mick returned to Coober Pedy on May 15th to race the Kanku-Breakaways Marathon. Mick was joined by lots of the local children, including many who had attended the April running clinic, and they raced the shorter events. A great day was had by all and Mick took the win in the marathon !